The knee joint is the most powerful and a hinge joint in the human body. Most of the movement that the knee joint allows is the same as of a hinging door. The knee joint additionally allows a slight rotational movement too.If we look at the anatomy of the knee in layers, then the deepest layer must be the ligaments and bones, then muscles on top, and ligaments connect to the joint capsule in the middle. Numerous blood vessels and nerves supply the bones and muscles of the knee. To understand the knee problems, it is necessary to have a look into the anatomy of the knee, the detail of which is as follows:

Four bones are present around the knee joint, which are:

Patella or the kneecap is a triangular and semi-flat bone – which is able to move around as we bend the knee.  The main function of the patella is to maximize the force of the quadriceps muscles. Any fracture or breakage of patella causes ineffective movements by the quadriceps and a person is not able to straighten their knee.

Femur (the thigh bone) is the longest bone. There are spherical knobs at the end of the femur which are known as condyles.

Tibia is the shin bone which runs alongside from the knee to the ankle. The upper portion of the tibia consists of two flat surfaces or plateaus which have the covering of articular cartilage.

Fibula is a thin and long bone present on the lateral side of the lower leg running along with the tibia originating from the knee to the ankle. The fibula aids in carrying some weight, but the tibia carries almost 80 to 90% of the total body weight. The important function of fibula is to shape the ankle joint and also acts as a link for muscles like lateral collateral ligament and biceps femoris. 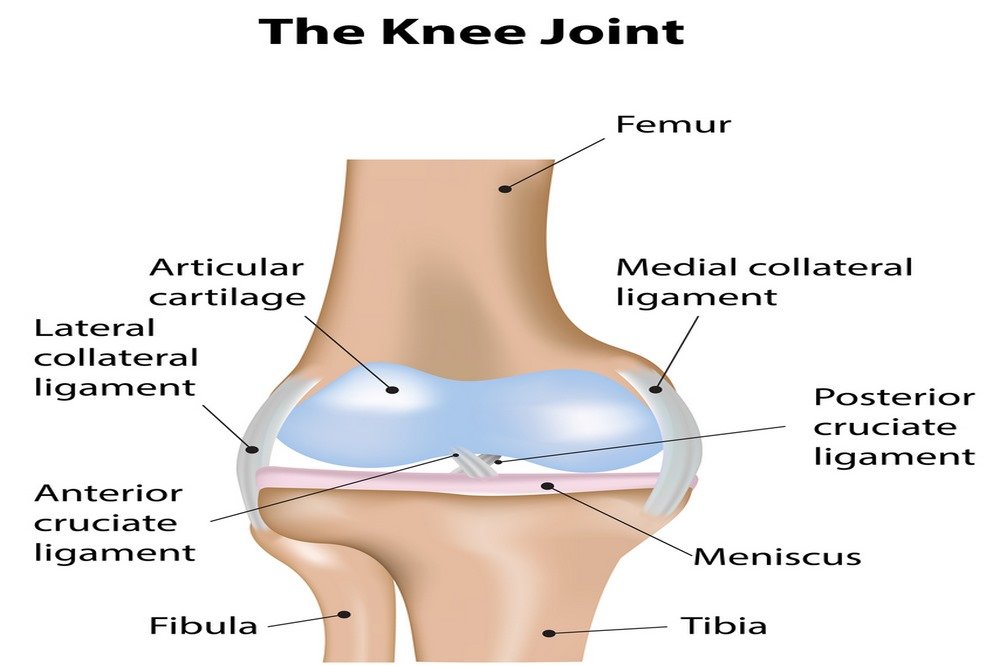 There are numerous types of cartilage in the human body, each with a slightly distinct function. For instance, the hyaline cartilage is a slippery cartilage covering the end surfaces of the tibia and femur while the fibrocartilage of lateral and medial meniscus are rubbery and provide extra strength to the knee. Hyaline or articular cartilage gives flexibility and acts as a shock absorber. If the articular cartilage starts wearing out then there are limited and painful joint movements thus causing arthritis. Unluckily, the cartilage is not able to repair itself and there is nearly no blood supply to it. Following are the two main types of cartilage:

Lateral meniscus is present on the lateral plateau of the tibia and comprises of fibrocartilage. It is more mobile than medial meniscus and provides great stability to the tibia.

Medial meniscus is present on the inner surface of the knee and has a crescent shape. Medial meniscus comprises of fibrocartilage and plays the role of shock absorber for the knee.

There are almost 14 of small fluid-filled sacs known as bursa within the knee joint and help in minimizing the friction between the knee tissues and avoid swelling.

The joint capsule is a bag of membranes surrounding the knee joint. Joint capsule consists of a fluid known as synovial fluid which nourishes and lubricates the joint.