Ringworm is a common disease caused by a fungus known as dermatophytes, and therefore it’s also given the name of dermatophytosis or tinea corporis. Although there are millions of yeasts, molds, and fungi present globally, only a few become the cause of skin infections. Till 1841 people were not aware that a fungus could cause ringworm disease. This fungus causes the infection, resulting in a red, inflamed circle on the skin just like a worm. The infection affects both animals and humans and can be visible as a red patch at first, but it can grow and spread on other areas of skin. The fungus typically uses keratin protein as food found on skin, nails, and hairs. It can live on the surface and other household items, and when the human body comes in contact with this fungus through any object, it results in the formation of rig worm. Being a contagious disease, it spreads from person to person and can be passed from animals to humans.

No original worm is involved in the formation of this disease, and it got the name only because of its appearance, which is a circular red area like a worm. This disease goes by different names depending upon its location on the body. It does not cause infection below the surface of the skin, including the area of limbs. The areas which can get affected by ringworm include 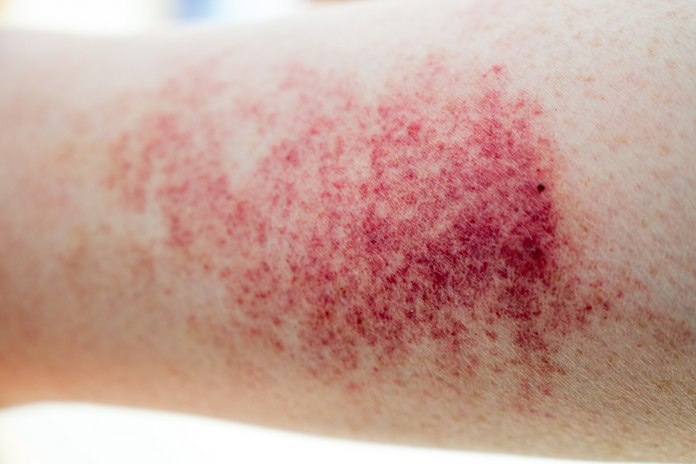 The symptoms of ringworm are easily identifiable. The ring-like structure with scattering red bumps and itchy dry areas can be seen on the skin of a person suffering from ringworm. Typically just a visual look is enough to diagnose the disease. Sometimes to confirm the cause if infection doctors scrape a small area of the infected skin to check it under a microscope or confirm it by sending it to test in the laboratory. Symptoms can be seen from 4 to 14 days after the skin comes in contact with the infection. Some of the common symptoms include

Red or pink rashes and flat patches are the first symptoms that can be seen in the infection area. If the skin is light-colored, then spots tend to be pink or red in appearance, while if in case of dark color skin, the patches can be seen as brown and gray.