There are different types of proteins present in the human body, each having a different function. Clotting proteins, also known as clotting factors, work with platelets to clot the blood. A deficiency or absence of these clotting factors causes a disease known as hemophilia.

Hemophilia is a genetic disorder, which means that it passes from parents to their child by the transfer of a defective gene, which causes the absence of clotting factors in the blood. In this disorder, a person experiences excessive bleeding due to the lack of blood-clotting proteins. Hence, the blood cannot clot properly and takes longer to clot; as a result, people face massive bleeding even from minor cuts and injury such as blade cuts, during shaving, or through small bruises. Internal bleeding is a main and serious concern in hemophiliac patients; it can occur in joints, elbows, and knees and may be life-threatening. 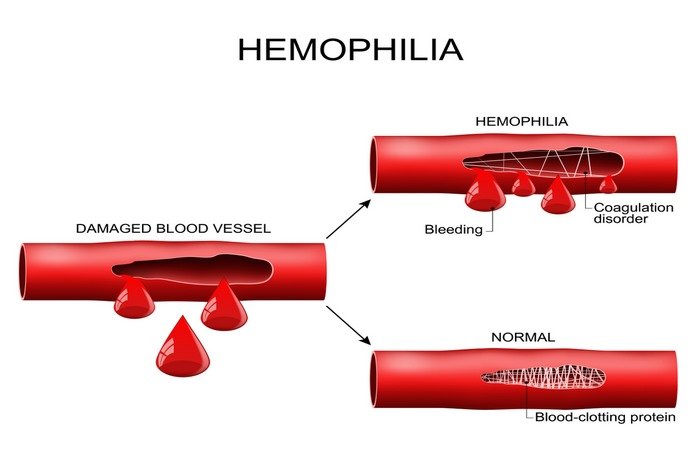 There are different types of hemophilia, i.e., A, B, and C. A is the most common, and B is the second most common type of hemophilia, while C is very rare. World Federation of Hemophilia reported that Hemophilia affects 1 in 10,000 people around the globe. Swollen joints, bleeding gums, pain in joints, excessive bleeding, blood in the urine are some of the symptoms of hemophilia. Treatment involves the regular replacement of clotting factors that are absent or present in an insufficient amount.

Different types of hemophilia show various signs and symptoms, which means that the symptoms depend on the kind of disease (the type of hemophilia) that a patient faces. The major symptoms of hemophilia include blood in urine, blood in the stool, bleeding gums, pain in the joints, excessive bleeding, deep bruises, frequent nosebleeds, and other severe symptoms. Its symptoms also depend on the absence of a specific clotting factor of the patient.

Blood in the urine, also known as hematuria, is a common symptom of hemophilia. It is a symptom that a patient faces and usually occurs with hemophilia. Peoples have not seen this symptom just in this disease, and it also occurs in some other conditions. Blood in the urine is a commonly impartial problem of the population. According to researches, 60% of patients with this disease see this symptom.