Emphysema is a type of lung disease that results in causing shortness of breath. People having emphysema suffer from damage in the air sacs of the lungs. The inner walls of the air sacs get weak and rupture eventually with time forming larger air spaces instead of several small ones. Emphysema decreases the surface area of the lungs and in turn reduces the amount of oxygen that get to your bloodstream. When a person exhales, the damage in alveoli due to emphysema do not let them function properly and starts trapping old air leaving no space for oxygen-rich and fresh air to let in.Majority of the people with emphysema also suffer from chronic bronchitis. Chronic bronchitis refers to the inflammation of the bronchial tubes carrying air to the lungs which leads to the development of a persistent cough. Chronic bronchitis and emphysema are the two conditions that add up to the development of chronic obstructive pulmonary disease (COPD). Frequent smoking is one of the leading causes of COPD development. Proper treatment might slow down the progression of COPD but it is not possible to reverse the pulmonary damage. Almost 3 million people suffer from emphysema only in the United States. 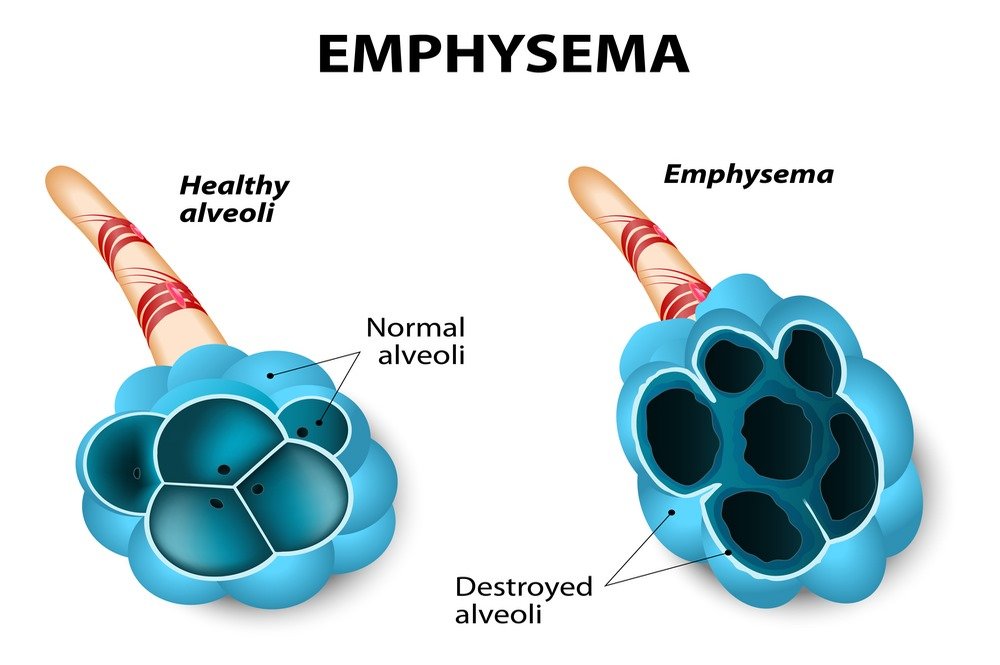 Alveoli are thin-walled, small, and very fragile air sacs present in clusters at the bottom of the bronchial tubes inside the lungs. There are almost 300 million alveoli present in normal lungs. As a person tries to breathe in air, the alveoli start to stretch thus drawing oxygen in and transporting it towards the blood circulation. The alveoli contract when a person exhales thus letting carbon dioxide out of the body. As emphysema advances, the lung tissues and alveoli suffer from intense damage. The studies reveal that many years of smoking and even second hand smoking can lead to the development of emphysema in a lot of people.

The damage to the alveoli makes it difficult for them to support the bronchial tubes, leading to the collapse of bronchial tubes. As the bronchial tubes collapse, there is occurrence of a blockage in lung tissues causing air to trap inside. The trapping of too much air in the lungs might five some patients appearance of barrel-shaped chest. In addition, less oxygen will be able to transport from the lungs into the bloodstream because there are lesser alveoli left. Moreover, emphysema is most common among men of ages between 50 and 70 years.

The researchers report that once the onset of emphysema begins, it is almost impossible to reverse its damage to the lungs and for this reason it is of immense importance to quit smoking. The air sacs also lose their structural integrity and become floppy. The improper function of the air sacs makes it difficult for the lungs to move oxygen in and let carbon oxide out of the body. The damage to the alveoli is quite slow so the symptoms tend to appear quite slowly. The most frequently occurring complication of emphysema is respiratory tract infection and lung failure. However, proper treatment and quitting cigarette smoking can improve the symptoms of emphysema and avoid the occurrence of life-threatening complications. [1]