Heat rash is a condition that develops in babies as well as in adults due to the exposure to hot sunny weather. Heat rash is also commonly known as Miliaria and prickly heat. As the name indicates, there is the development of rashes on the skin due to the extremely hot and humid weather, especially in summers. Heat rashes not only develop in babies, but it also greatly affects the adults too after spending some time outdoors. As far as babies are concerned, their skin is very much sensitive as compared to the skin of adults, and thus there are more chances of the development of heat rash in kids. As the chances of getting heat rashes are greater in hot, humid conditions, so the people must try to avoid going outside during warm weather.

Moreover, due to the prolonged exposure to heat and sunlight, the sweat ducts in the skin layers trap the sweat or perspiration, and then there is the development of rash patches in that area of skin. The symptoms of heat rash may be mild in some people, while the heat rash can turn into a serious skin problem due to the formation of superficial blisters to red, deep lumps on the skin. While in less severe exposure to heat, the affected people might feel prickly itching on the skin area or redness of the skin. There is the formation of tiny bumps on the skin along with the redness of the skin, and these bumps itch a lot. These red bumps are very itchy, but the condition is not dangerous for the person affecting from heat rash. 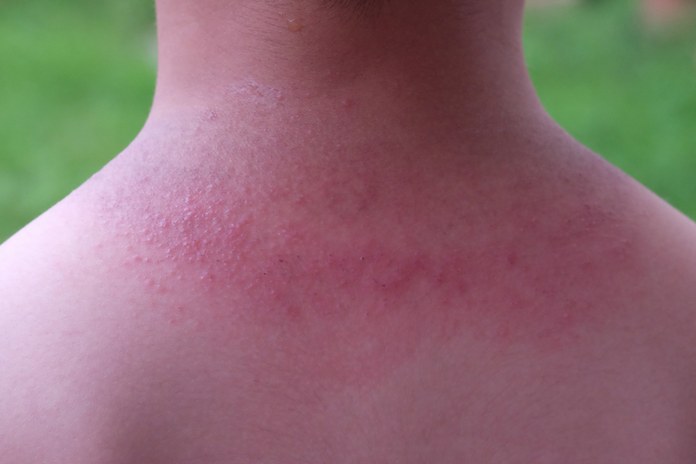 Heat rash is a lot common in infants due to their high sensitivity of the skin towards temperature and sunlight. Moreover, the people who play sports or are generally more active also have higher chances of developing heat rashes as they are seating a lot. Newborns in incubators, the patients on bed rest, and the people having fever are also more likely to get heat rashes. Heat rashes usually occur on the covered areas of the body, such as your abdomen, back, neck, groin, upper chest, and armpits. Although heat rash is not a serious condition, it might be very uncomfortable for the people having heat rashes, and also it might develop into deep red lumps that get better in a few weeks. Heat rash does not need medication in most of the cases and usually gets better with cooling the skin off.

Miliaria Rubra is a type of skin rash in which there is the appearance of small and itchy rashes due to the trapping of sweat in the pores of the skin, which gives Miliaria the second name of sweat rash. The main reason behind the development of heat rashes on the skin is the clogging of sweat gland ducts. Heat rash or miliaria rubra is a common skin disease among the people living in hot, humid conditions like in the tropical areas. For the treatment of the itching rashes on the skin, the dermatologists usually suggest cooling the skin by taking showers with cold water. After cooling the skin off, the doctors recommend using a topical gel, which gives the sensation of cooling and also reduces the inflammation of the skin due to all the itching and bumps.

The doctors usually identify the heat rashes by their appearance on the skin, and the severity of rashes determines how long the rashes will take to go away. Mostly heat rash does not need any medical attention, but if it does not go away on its own and if the rashes appear to be getting worse, then a person must contact some medical professional. In most cases of heat rashes, the rashes go away on its own after 3 or 4 days. Moreover, if a child is suffering from heat rashes, then the child might develop the symptoms of fever. The heat rashes are not infectious, but the itching can cause the spread of red bumps on other areas of the skin too. The heat rash might turn into a type of allergic contact dermatitis if the redness and bumps are not going away, and you must check in with your skin specialist and find out what substance is causing this allergic contact dermatitis.